“There are . . . .” I panted, “fruit, ah cherries . . . .for your smoothie.”  I was breathless as though I had run a marathon, and yet all I had done was get out of bed and organise breakfast.   Then there was the tingling in my limbs, the memory loss, the pounding of my heart from merely getting out of bed that had all been getting progressively worse over the course of the week.   I was only in my mid 20s; this was ridiculous.   Magnesium tablets had taken the edge of the symptoms for the past week, but now it was only just working.

“Are you breathless, Liz?”  my husband asked in concern, and I nodded.

Half an hour later we took ourselves off to the emergency room in our small town.  The doctor said I walked like an 80 year old, and I didn’t have the energy to pick up my nursling one year old, and after several hours was packaged off by ambulance to our nearest city hospital for further tests and heart monitoring. 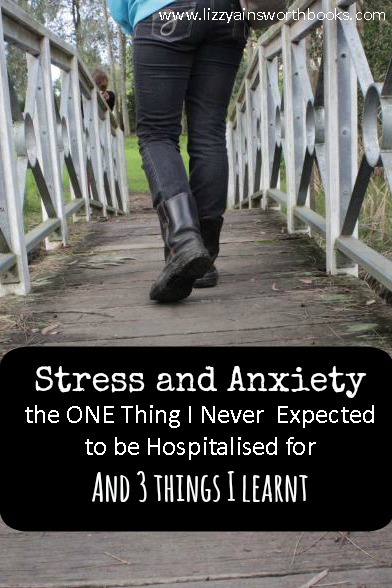 Dr after Dr ran tests and we ruled out a blood clot to the lungs, and the test for damage to the heart returned negative.

Had I been stressed recently? they asked, and apparently I mumbled some incoherent answer, because they took my husband off and he explained every blessed thing that had stressed me out over the past month.

And eventually a diagnosis came: slight swelling to the heart from the cold we’d had the previous weekend, accentuated by stress and anxiety.    The treatment: deep breathing and 2 bags of fluid, then sent home at 10pm, with a  cheerful baby playing peekaboo around hospital curtains.

I never expected I would be hospitalised for stress and anxiety.

I was the one who wrote about being strong in the ER and overcoming by the power of the WORD and controlling your thoughts.   How I’d nearly gone into labour because of my thoughts and the change that came when I pulled them into line with God’s Word.   I’ve also written about how anxiety can be caused by spiritual attack and how to deal with it, but I never expected the physical side of it to knock me out flat in a hospital bed.

I learnt three things from that hospital visit.

A few months after writing this, I went to see a GAPS  (Gut and Psychology Syndrome)practitioner and we started treating this anxiety through food choices, going sugar free, dairy free and grain free as she determined that I had leaky gut.  This is where bad bacteria punches holes in your gut and then the toxins go to your brain, causing havoc!  The GAPS protocol can help with many autoimmune, and psychological issues. Many parents have also seen huge improvements in children with autism.

5 thoughts on “Stress and Anxiety: What I Never Expected to Be Hospitalised For”