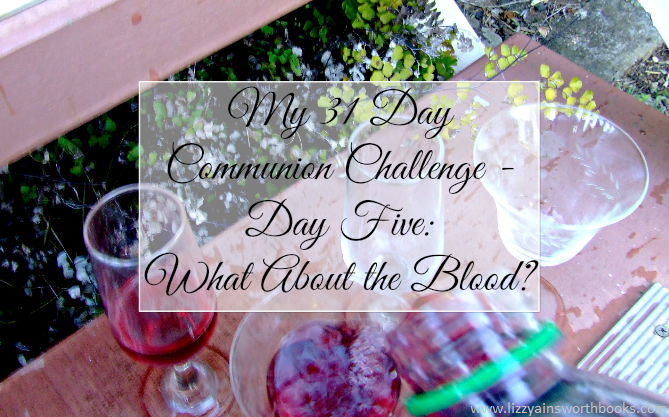 The past couple of days we’ve really focused on the bread component of communion, and today I want to focus on the blood before I start outlining another book.  If you want a visual and audio review with some more depth from Joseph Prince, you can watch a video here.

Taking communion is also a way to declare to the spiritual powers and principalities Jesus death and resurrection which is powerful.

The blood of Jesus protects and cleanses.  It is stronger than occult blood covenants and so if there is a haunted area, taking communion there can cause a breakthrough in the spiritual atmosphere.   My husband Stephen has experienced this numerous times, especially pouring out communion over the land to cleanse it from any blood pacts that have been made there, which can be hindering people’s spiritual progress and causing illnesses from the curses placed upon the people who dwell there, or even cleansing the atmosphere in a new or existing home.

For an example of how this really works, have a listen to Jennifer Toledo, who also wrote one of my favourite books: Children and the Supernatural. (I realise that the audio is long, but if you can make time for it, it will truly challenge your faith and your relationship with God, I have listened to it numerous times and gained so much from it.)

For whenever you eat this bread and drink this cup, you proclaim the Lord’s death until he comes.

And having disarmed the powers and authorities, he made a public spectacle of them, triumphing over them by the cross.

For a really comprehensive look on the power of the blood, have a read of these stories, including one of how a particular denomination took all the hymns regarding the blood of Jesus out of their hymnals because it was supposedly ‘irrelevant and old fashioned’ with devastating results.   I heard this story on Vision Radio, Australia’s nationwide Christian radio service, several years ago and it has stuck with me.  I was so excited today to find the transcript for that broadcast.