I’ve always been what you call a ‘good Christian girl’.  Grown up in a Christian home and went to church as much as I was able, and yet somehow I’ve missed some basics of our faith, including why we take the Holy communion.  A couple of years ago I really started digging deep into this, studying the Scriptures and reading books by well known authors and teachers, and I began to see a whole side of sharing communion that I was totally missing. 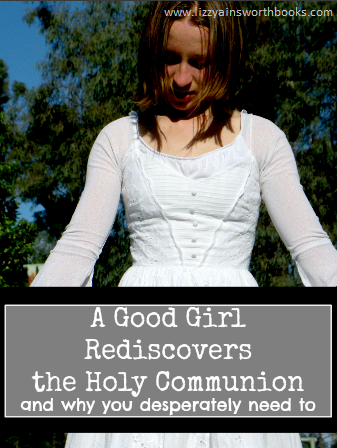 Now my family and I take it regularly, together, because it absolutely brings breakthrough, health and unity in our home, and I want to share some basics here today with you.   This is deep stuff, and you may need a bit of time to read it.  I originally had it split into 31 Days of Communion, but for most people that was overwhelming! I’ve condensed it drastically, cut the waffle and only kept what you need to know.

Let’s dig in, beginning with a testimony of the power in taking communion in desperate circumstances, by Robyn Small, my husband’s aunty and co-pastor with her husband of a church in Toowoomba Australia.

Communion and Childbirth – a Testimony

“Many years ago I was present when my daughter gave birth to her second baby, Aimee.  The birth left Lee Anna exhausted, and our Christian midwife was concerned that not all the membranes seemed to have come away.

Three days later my son in law woke me in the early hours of the morning to say that Lee Anna was in agony, and he was taking her to the hospital.  As they drove off I was filled with fear that some of those membranes were causing problems and Lee would go into toxic shock and die.  Fear just gripped me like a vice.

I knew I had to take communion for my daughter.  I couldn’t find any grape juice and the bread was all frozen, so I took a sao biscuit and some orange juice, and using these as symbols of the Body and Blood of Jesus, I declared to the heavenly realm that my daughter was under a blood covenant with God, and part of that Covenant was health, and because of what Jesus had done on the cross I was asking for my rights of health for my daughter.

At that moment, as Lee Anna and Jeff drove to the hospital, the pain left.  When the nurses examined her they could find nothing wrong.” 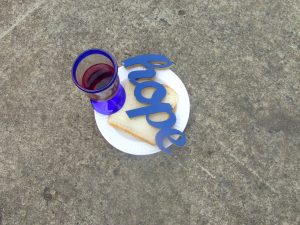 So What is communion, exactly?

The Holy Communion, which some call the Eucharist, is what is referred to as the last supper, which Jesus had with his disciples before he was crucified, in which He was actually keeping the Passover, a Feast God had initiated many years before as part of His covenant of protection and health when the Israelites fled from the Egyptians.

I say health also because when the Israelites left Egypt, ‘There were none feeble among them’ Psalm 105:37.

God had established this covenant in the Old Testament and brought it into the New Testament by Jesus laying such importance on it.

“And as they were eating, Jesus took bread, blessed and broke it, and gave it to the disciples and said, “Take, eat; this is My body.”

Then He took the cup, and gave thanks, and gave it to them, saying, “Drink from it, all of you.  For this is My blood of the new covenant, which is shed for many for the remission of sins.”

Do you have a list of physical, emotional or spiritual breakthroughs that you are believing for?

‘It’s by the blood of the Lamb and word of our testimony that we overcome.’   Revelation 12:11

More testimonies of the Blood of the Lamb overcoming here.

The Forgotten Key to your health

Communion was a major part of New Testament church and Jesus commands us to take it, for which there must be a reason.   Taking communion, and understanding what you are doing as you do so is declaring in the Spirit realm the forgiveness of your sins and healing of your body.

“In him we have redemption through his blood, the forgiveness of sins, in accordance with the riches of God’s grace” Ephesians 1:7 NIV

(or in the NKJV, eats in an unworthy manner)

So the opposite would be that if we do discern or understand why we are taking communion, that we would walk in health and be strong.  The above verse has scared many people away from taking communion regularly, and it’s not to be done lightly, however, if you do sincerely confess your sin before God, and repent, which means to turn away from, taking communion empowers you to live righteously.

Confess your sins to God and you will be forgiven 1 John 1:9

Joseph Prince talks about how the words unworthy manner here actually refer to way in which the Corinthians were doing it and getting drunk and disorderly, not about the person doing it.

God calls Himself our healer, way back at very first Passover, and if that was a shadow of things to come, and the lamb that was slain with it’s blood marked over the doorposts for their protection, and that same lamb and bread caused them to walk out of Egypt in supernatural strength and health, then how much better is our new covenant and healing through Communion?

“He said, ‘If you listen carefully to the voice of the LORD your God and do what is right in his eyes, if you pay attention to his commands and keep all his decrees, I will not bring on you any of the diseases I brought on the Egyptians, for I am the LORD, who heals you.'” Exodus 15:26 NIV

God, our heavenly Father, is Jehovah-rapha, “the Lord who heals you.” 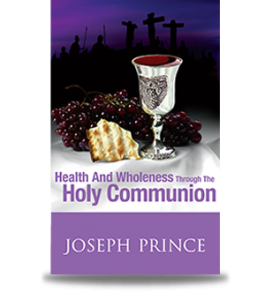 Jesus was lashed 39 times, and that there are 39 categories of diseases.   You can read testimonies of people being healed as they build their faith through receiving the Holy Communion, including painful cramps during menstrual periods because of a certain medical condition and  a strained knee.  You can also read many more in Joseph Prince’s book, Health and Wholeness Through the Holy Communion.

Where should I take communion and who with?

The Bible says that believers met together in their homes, taking communion.

“So continuing daily with one accord in the temple, and breaking bread from house to house, they are their food with gladness and simplicity of heart.”  Acts 2:46

These days some Christians meet together at church, where some congregations take it weekly, others monthly, and some yearly, but there is nothing to say that you can’t take it at home, between you and God, or you and your family.

In the New Testament we are called ‘kings and priests’, and God has made provision for us come to Him ourselves through our relationship with Jesus, that’s part of His death on the cross, purifying us with His blood.

I Peter 2:9 NIV But you are a chosen people, a royal priesthood, a holy nation, God’s special possession, that you may declare the praises of him who called you out of darkness into his wonderful light. 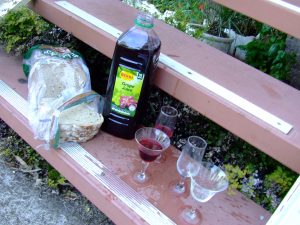 When should I take it?

We are told we can take communion as often as we remember Jesus, there is no limit on how often we pray, or worship, sometimes we just haven’t studied a matter for ourselves, or realised the importance of a spiritual discipline.

In the same way, after supper He took the cup, saying, “This cup is the new covenant [ratified and established] in My blood; do this, as often as you drink it, in [affectionate] remembrance of Me.”

We have gone through seasons where we have taken communion together every day and other seasons where we receive it together just whenever we need breakthrough and are praying through heavy spiritual matters.  All we use is a bottle of grape juice and an ordinary loaf of bread.  Different churches use different items, some use wine, some use matzah or wafers, and I’ve heard of islanders using coconut milk and meat; not so sure on that one, but if you’re in for this; please join me.

In my original 31 Day Challenge, I had several other families taking communion with me and one wife saw a huge turn around in the spiritual atmosphere of their home, as she just stood before God and took communion daily.  That in itself was enough to declare to any unwelcome spiritual guests that Jesus was Lord of that home, and I dig deeper into the power of the blood of Jesus, here.

2 thoughts on “A Good Girl Rediscovers The Holy Communion”