Sometimes it’s hard to care any more, when one more tide of bad news washes over you.  I’m not compelled to love; I’m just weary.

Another stabbing, murder, suicide, robbery, Ebola outbreak, beheading, kidnapping, rape.  Some days I don’t turn the news on because I don’t want to know anymore.  Then my husband comes homes and tells me everything he’s heard because he loves the news, and I just don’t.    I’ve tried to make it a habit to stop and pray for the bad things I hear happening on the news and to get him to stop and pray too, even to put some time and thought into it. 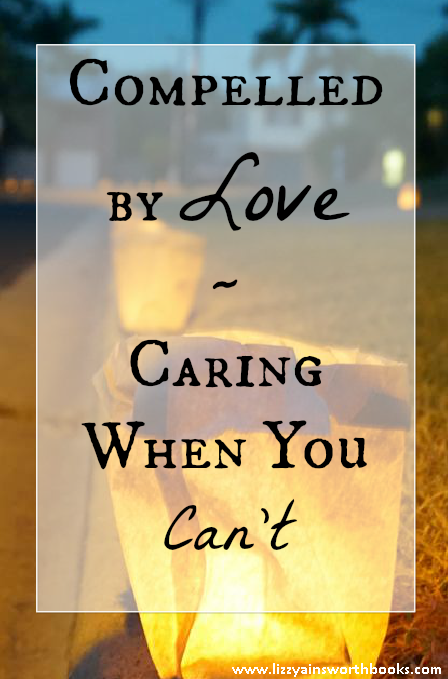 I do want to care though, I want my heart to break at what God’s heart breaks at.  I want to live a life Compelled by Love, like Heidi Baker, a missionary in Africa who just pours out God’s love.

Her life has a motto to ‘stop for the one’, even though she’s a crazy lady who has stopped counting the amount of people God’s raised from the dead through her, how many blind eyes have been healed, how many deaf ears heard.

The story goes though that when she first started going to villages, she would announce that God wanted to heal blind eyes, call everyone forward and pray for them . . . and nothing would happen, except the angry villagers would start stoning her and the team.   She had a promise from God and she cared, and she pushed through and came back, and back and back and God started acting mightily as she obeyed and followed Him.

I sometimes wonder though whether I would have kept coming back, or run back to my safe compound when that first rock was thrown. 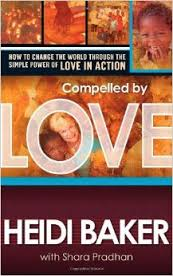 Heidi’s written a book called, Compelled by Love and it unpacks the sermon on the mount in the most radical of ways, challenging everything you ever thought life and love were about.  It’s not something that we could ever live on our own.  We need God’s grace, His supernatural empowering for life.

This is a book review in the rawest of forms, it’s what God is teaching me now and it’s about being moved with compassion.

How do we get to that place of living radical love?   I’ve tried doing it in my own strength, to force myself to go talk to someone and it doesn’t work.

I was listening to a sermon last week about carrying and living God’s Kingdom but the one thing that was highlighted for me was that Jesus was moved with compassion.  So often we pray for boldness to go and do God’s work and while we need that, it’s compassion that moves us, when we see things how God does, when we start crying out ‘break my heart for what breaks yours’ like in the Hillsong song Hosanna, albums Saviour King and All of the Above.

This audio clip  and script by Jennifer Toledo, who wrote Children and the Supernatural, talks about a fascinating vision God gave her and how He sees all the atrocities that take place on earth and how He wants us to see them.

Jennifer Toledo is one of my favourite role models, but like Heidi Baker, she is also crazy in the best of ways.  On one of her audio clips she talks about travelling into an incredibly dangerous area of Africa and how she just knew she needed to go talk to these people about God but the rest of the team didn’t want to because they thought it was too dangerous, and they could all quite possibly get killed.

My heart sunk when she said that because I knew then that I would be sitting with the rest of the team.  I mean, I’ve done my share of dangerous crazy stuff, avoiding 3 hold ups in one day in PNG, but I knew I needed some more of God’s love, so right now I’m crying out for a heart of compassion.

(I really do hope you can find time to listen to Jennifer’s audio clip, because maybe God wants you too, to go to that radical place of love, to the weeping room that you’ll find out about in the clip.)