“You’re moving into a new spiritual season,” I told my friend and she looked at me with raised eyebrows.   “This is a season  where God is doing a deep work in His people to understand His love, it’s not just you going through this at the moment.” 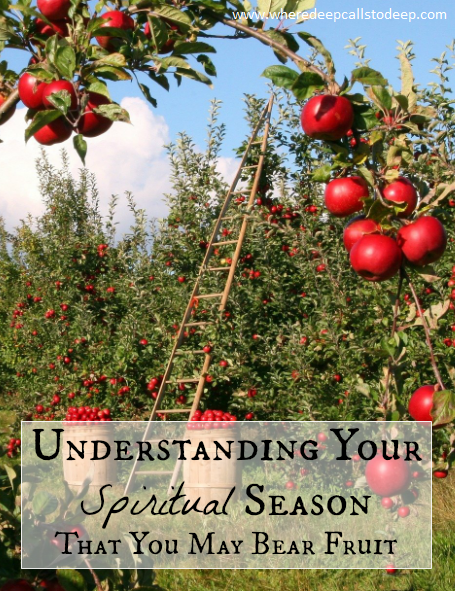 Our lives ebb and flow, cycling in seasons and yet unless we understand this we can struggle to understand why our lives are going in a certain direction that we hadn’t anticipated, or we think there is something wrong with us when our lives look dry, not realising that God is doing a greater work through the body of Christ, in a particular area.   I’d love to explore this concept with you, so that we can go on to produce much fruit, from our life abide in Christ the Vine.

The season of this past year has been crazy.   We had plans and thoughts in January of how we thought it was going to pan out, and by March they were mostly shattered, but that doesn’t mean that those dreams weren’t from God.  It’s been a time of sifting to find out which ones were.   Maybe He gave them to you so you would have something to hold onto in this tumultuous time; that there is a future and a hope.

For many people it’s been a season of having the time to dig deeper into God than they have ever been able to before, and I know many Christian ministries have deliberately been launching new products and making existing products cheaper or free to help facilitate that growth.

A few years ago I was so sick with allergies and only able to eat four foods. I actually couldn’t go out much, it was too exhausting and took too much prep, but it was a season where the medical system and naturopaths couldn’t help me so I dug deeper than ever into God and began re-laying the foundations of Who He was and His promises to me.

Sometimes we think we have a really good foundation until a storm strikes, which is certainly what I thought, but the storm proved otherwise.  As my foundation in Him became stronger, my healing manifest and I was able to eat anything again.

Maybe you’ve been digging deeper into God, or maybe in this time where many places are still in a semi sort of lock down, it’s something you need to do.  A fantastic resource that really helped me was many of the FREE teachings by Andrew Wommack.

My foundations including realising that God wanted me well, the power of hope, that I already had everything I needed in Him.   I share more about my healing journey in this blog post titled Biblical Methods of Healing.

Since I spent that time learning who I was in Christ and re-laying these foundations I’ve been able to pour far more truth out and into others than I ever was before.  I would look at people and go that’s just too hard for me, and yes, some situations God doesn’t want me to get involved in, but now I’m so much more confident to speak His truth.

Whatever your season, shoring up your foundations is a good idea. There’s always more to learn, but sometimes just understanding how life moves in seasons is helpful.

Some season changes are obvious, like moving, having a baby, or a new job, and other seasons come slowly like in the natural.   Everyone told me when I had a baby that my life would change, and of course it did, but I found that it changed more when she started to move, and I could no longer take her quietly sleeping self to prayer meetings, ministry sessions and all the activities my youth pastor self had been involved in.    My life started to slow down somewhat, and a serious pruning of activities took place.

The first Christmas after my baby my sister had given me a wire metal tree with little fruit balls on it, and said that God wanted me to bear much fruit, and yet as I watched my activities and capabilities dwindling, I struggled to understand what that meant, other than having another baby.

Then my father-in-law explained that when God has more fruit for us to bear, it first involves pruning.   In this particular occasion God pruned activities, and I began to realise that I had really let my time with Him slip away to ministry activity.   Our lives are all about fruitfulness, but what that looks like to us, and what that looks like to God can be two different things. 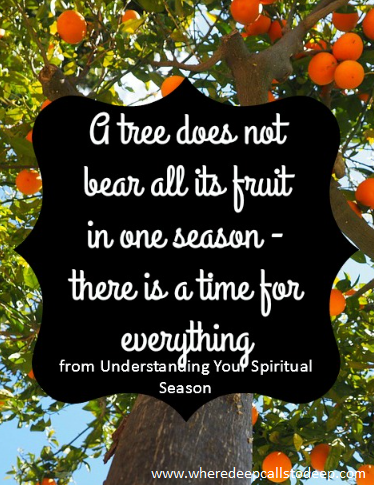 I also began to understand, that as many things as I wanted to do for God, and good ideas that I had, a tree does not bear all its fruit in one season.    Sometimes I think that as a generation we’ve been told over and over that rapture is almost upon us and we rush to fit everything in while letting our relationship with God fall away.

This is similar to the transition that happens when giving birth.  The baby’s head descends down the birth canal, you can see it, but it’s not quite through, and it disappears again.  This is to give everything a chance to stretch, and this can go on for hours.  If you push too soon, you can tear.   God can give us glimpses of our new seasons, and promises, I and it can feel like it’s almost here but then we lose sight of it.   We are stretching into that new place.   But it’s important that we stay focused on the fact that we are going to have a baby and keep God’s promises before our eyes, whether that’s words of a song He’s given us, Scripture or  prophetic words.

I woke up a few weeks ago with the words,

“Our prophetic words are not a mere distant promise, they are the very bridge to get there.” Meaning that as we meditate on them and speak them over our life they give us hope to hold onto in the hard season.   I share more about prophetic words here.

An analogy I’m hearing a lot from spiritual leaders at the moment is that of a bow and arrow, where we are stretched back further and further so that we can be fired more accurately, and fly further. 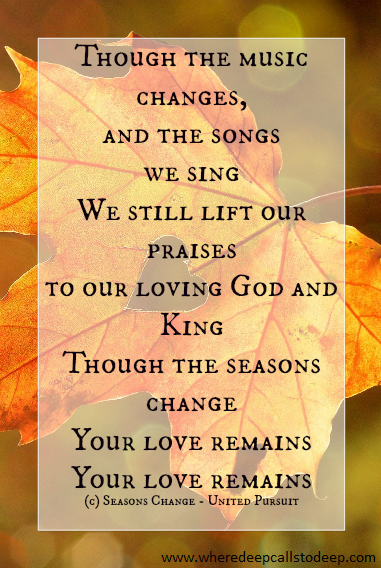 Seasons can affect our lives personally, and we can each be going through a different season, but seasons can also affect the body of Christ corporately.   God could be doing a major purifying work, or it could be a season of new beginnings, or the enemy could be really attacking people in a certain area.   It’s important to be in regular fellowship with other Christians so that we can get a sense of what God is doing and not be isolated and think that its just our problem.  So many people I’ve talked to are so relieved to find out that they are so not alone in what they are going through.

I found the book In Season by Wayne Jacobsen to be a great help in understanding the cycles our lives go through and how to work with God in each season instead of resisting because it isn’t like our previous season. 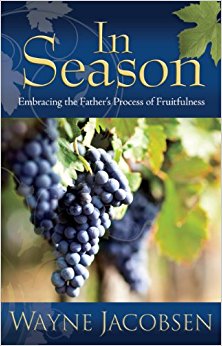 God has recently had me in seasons where I am doing nothing FOR Him but only being WITH Him.   He has removed us from all ministry opportunities so that our roots could go deeper, and we’ve become far more rooted in the Word than we ever were.

Unless we understand how seasons work in the Kingdom of God, we began to freak out that we are not being effective, so let’s look at seasons in the natural and parallel them to the spirit.

Spring ~  fresh buds bloom, all is green and new, beautiful and exciting.  New opportunities appear, God is speaking everywhere we look, and promises from the past are being fulfilled.

Summer ~ all those new opportunities need to be brought into mature fruit.  This requires a steadiness and it can feel hot sometimes.  We need to keep connected to our water source so that our fruit doesn’t shrivel prematurely.

Autumn ~ it’s harvest time and we see great results.  It’s time to celebrate all the many things God is doing, but also doors might be closing.   Things that were once fulfilling might be losing their appeal and it’s time to re-evaluate what we are involved in.   If we have been super busy, exhaustion could be taking it’s toll.

Winter ~ is cold, and it’s when pruning takes place; right back to the vine.   The more mature a vine is, the more harshly it is pruned every year, so that in spring it may bear even more fruit.  God not only prunes excess activities but also heart issues, including forgiveness, our thoughts, pride and anything else that is hindering us spiritually.

Pruning is so important, and not resisting God’s pruning is even more important, because the more we resist, the more our consciences can become seared, as we refuse to deal with certain things.
In Secrets of the Vine, author Bruce Wilkinson, goes through many scenarios of how God prunes us, all for the end result that we may bear much fruit.   This is deep stuff, and I believe this pruning is what God is talking about in Hebrews 4:12  For the word of God is alive and active. Sharper than any double-edged sword, it penetrates even to dividing soul and spirit, joints and marrow; it judges the thoughts and attitudes of the heart.

God prunes us in our attitudes, thoughts and the judgements that we make on others.  He prunes us of unforgiveness.

He can prune our relationships.  Sometimes He will bring people into our lives to refine us and then He can move those same people out just as swiftly.

He prunes us in the area of health by challenging us to take better care of our bodies.

And He prunes us by challenging us to use our time better, and that looks different for everyone.

In the Old Testament, the Sons of Issachar were known as being able to understand the times, and spiritual seasons.  We need to understand the times we live in too.  God works through times and seasons, eg 7 year periods,  and especially the different feasts that He has established such as Passover, Pentecost, Purim etc.  Two of my favourite prophetic voices to learn from in this regard are Lana Vawser and Doug Addison who both have a good understanding of what God is doing in the church and individuals.

I hope that I have helped you to look at your life as seasonal, and that there will be an ebbing and flowing of your activities.  A time to sow and a time to reap.

11 thoughts on “Understanding Your Spiritual Season”