I kept having this spontaneous thought in my mind of the story from the Psalm 91 book by @peggyjoyceruth Peggy Joyce Ruth of when her daughter worked at a mental institution and she kept feeling to pray Psalm 91 over herself for protection. A week later there was a big break out and miraculously she didn’t get hurt and the situation came under control very easily.
I didn’t know why I kept remembering this story but every time I did I would pray in tongues. A week later I was talking to someone on the phone who told me about a situation with a mental health patient that ended a lot better than it could have and could have potentially turned quite dangerous and I suddenly realised why I had been praying Psalm 91 a lot.
The book Psalm 91 was written by Peggy Joyce Ruth. It was as God showed her the psalms of protection in there and as she spoke them out that she was freed from a fear that had nearly put her in a mental institution and she had received so many different treatments for none of which had worked.
It is an amazing book of miracles of protection from plane crashes, shark attacks, electrocutions, kidnappings, war, bike accidents and the list goes on from people who heard about speaking out the promises of Psalm 91 and actually saw them in effect in there own lives.
I remember we were on holidays at my husband’s parents place one year at Christmas and we had gone scooter riding and at the last minute our 6 year old daughter had come and none of us were wearing helmets. I started praying Psalm 91. And then somehow my daughter came off and I was behind her and I saw in slow motion her do a backflip and I screamed as her head hit the concrete. She should have snapped her neck but miraculously she was not hurt at all and got up and rode home.
It’s the Psalm I pray every day.

I’ve actually written about this Psalm many times over the years.  I first started praying it after my husband’s motorbike got stolen.

“Where’s your motorbike?” I called out to my husband in the shower from the back door. “Under the house,” came the reply.
But it wasn’t. He’d been using the car for a few days to go to work and I’d been walking, and in our newly-wedded bliss, neither of us had paid much attention to the whereabouts of the little bike. Then the pushbike went missing, and someone tried to break into the laundry where he kept all the tools, and one night in the middle of Bible study a few doors down, he went back home randomly and found someone lurking under the house. . . .

It was soon after this that we discovered the power of praying Scripture over our lives, one in particular, and this is the prayer that we pray for our family everyday.

Read more at KayleneYoder.com where I am guest posting today. 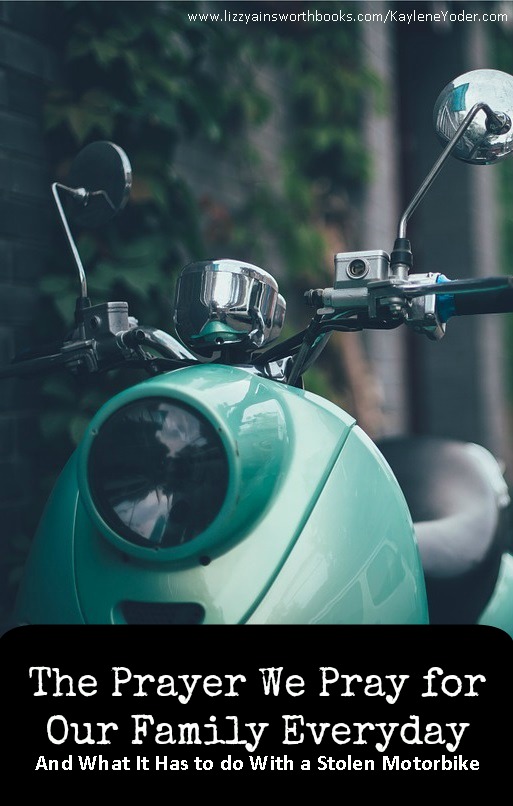 3 thoughts on “The Prayer We Pray for Our Family Everyday”