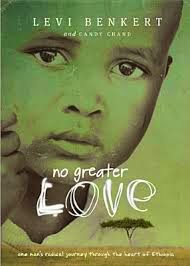 I read a book last week.  Nothing astounding I know, it was just one that I picked up at the Healing Rooms where we were hanging around between prayer sessions.  It was called ‘No Greater Love’, a nice title, one that realistically a lot of books could be titled, because many people every day sacrifice much for the sake of others.

It was the story of a man, Levi Benkert, who was headed down one path, and because of the GFC, was dramatically re-routed onto his true path of destiny; saving orphans in Africa.

Whenever I hear the word destiny, Africa is where I think of, because sometimes it’s hard to equate my stay-at-home Mummyness and Sunday School teaching with destiny.  But that’s my journey now, my journey and destiny.

Levi’s was in Africa.  This story along with many others shows how God guides lives even when we aren’t necessarily walking close to Him, because Levi was almost ‘randomly’ asked by a friend to go to Africa to help set up an orphanage.  His desperation to escape the reality of the crashing global market and pending bankruptcy pushed him to gasp yes.  His breather trip to Africa to save ‘Mingi’ children, children who because they were born out of wedlock, without the intent to conceive them being announced to the chief, or because their top teeth came through before the bottom, were considered cursed, and consequently killed, suddenly became his life calling.

Amazingly, this one family, who were later joined by other relatives and former colleagues, were able to totally stop the Mingi practice.    This family learnt about ‘no greater love’ when they welcomed orphaned ones into their own home, space, hours and spent dark hours of the night rocking them to sleep.  They learnt ‘no greater love’ when they travelled days to take a landrover of screaming children not their own for medical help, and they learnt more, when God scooped them up and held them gently when tragedy and trials saw them screaming through the night.  This story of ‘no greater Love’ is not just another autobiography from Africa, it will minister deeply to your own heart, right where you are now.

Please read . . . it’s beautiful, and so is your story, where ever you are in your destiny now.

You can see more of what Levi and his friends are up to here http://bringlove.in/