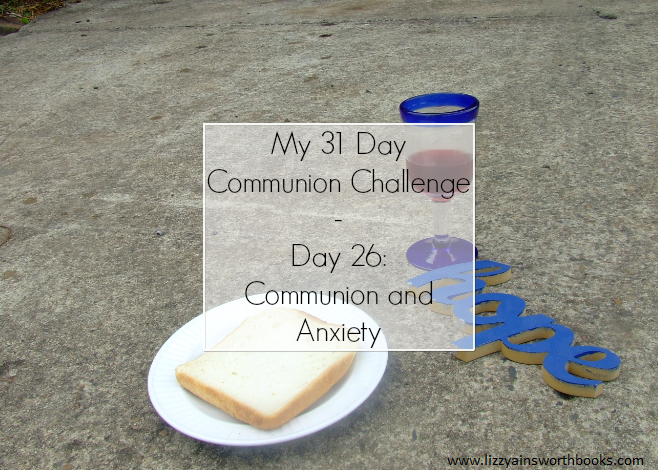 I realise this one is going to be a touchy subject.  I also realise that sometimes anxiety is a hormonal or nutritional imbalance.  FoodMatters dvd  has great information on the supplement Niacin which really helps with depression.

Sometimes anxiety and depression are spiritual attacks too.  I know because I’ve

been there and so has my husband.   Where you brain is seeing ridiculous images, is tortured over you’re not quite sure what, you’re moody and weepy and it’s awful.

For our battle is not against flesh and blood, but against the rulers, against the … dark world–the spiritual hosts of evil arrayed against us in the heavenly warfare.

That we henceforth be no more children, tossed to and fro, and carried about with every wind of doctrine, by the sleight of men, and cunning

Therefore confess your sins to each other and pray for each other so that you may be healed. The prayer of a righteous person is powerful and effective.

So if someone tells me that they suddenly are depressed or anxious, I ask them what has happened in the days leading up to that point in time, and pray through with them that issue.

So, communion and anxiety.  You’ve seen above some steps that we’ve needed to take to become free of spiritual anxiety attacks, and one step is communion, though I haven’t particularly high-lighted it.    One more thing that has helped through times like these is to discover what steps God has ordained us to take to discover JOY, and usually it involves getting loud about our praise and physical movement.  Here’s my study.

Whether your anxiety is spiritual or natural, God has better for you, and taking communion is declaring to the spiritual realm Christ’s victory in your life and over the demonic.

‘For whenever you eat this bread and drink this cup, you proclaim the Lord’s death until He comes’

And at His death, He won the victory for us.

And thanks be to God! He gives us the victory through our Lord Jesus Christ

Communion is also declaring healing.  Earlier in our study we looked at how our healing is 3 dimensional.  Body, soul (mind) and spirit, and there is healing for each part.

The words in brackets are mine.

4 Surely He has borne our griefs And carried our sorrows; Yet we esteemed Him stricken, Smitten by God, and afflicted. 5 But He was wounded for our transgressions, He was bruised for our iniquities;

The chastisement for our peace was upon Him,

And by His stripes we are healed.

And why the crown of thorns?  Thorns were part of the curse, and they were pressed down into his head, the curse broken over mental struggles as we partake of the healing won for us.

I hope sharing some of my journey with depression and anxiety helps you to understand there can be more than one cause.  Peggy Joyce Ruth, author of Psalm 91, has further resources on overcoming spiritual depression and anxiety, in her book Tormented; 8 Years and Back.   I’ve interviewed her here